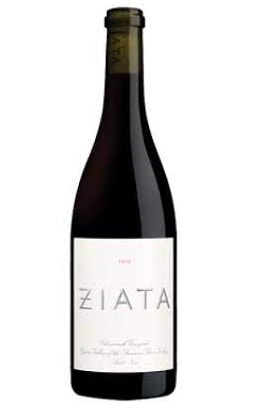 About the Producer: After 20 years of marketing Napa Valley and its wines, Karen Cakebread launched her own project in 2008 with two major goals in mind: to create beautifully structured wines that reflect the vineyards from which they come, and to be involved in every aspect of making the wines.

Karen started ZIATA, named in honor of her mother, Mary Annunziata, in 2008 with three varietals: Cabernet Franc, Sauvignon Blanc and Pinot Noir, which she chose for their food-friendly qualities. She hired Anne Vawter, a protégée of Heidi Barrett, as winemaker and sourced grapes from sustainable sources, working closely with the grape growers through the growing season, knowing that efforts made in the vineyard would create better wine than those manipulated in the cellar.

Tasting Notes: This wine exhibits enticing aromas of violet and ripe cherry, followed by red fruit flavors of raspberry, cherry, and strawberry and finishing with cinnamon and spice notes.