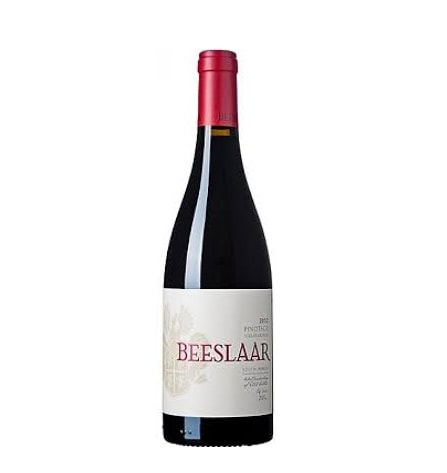 Winemaker Notes: The Beeslaar Pinotage comes from a single vineyard in Stellenbosch, South Africa, planted on shale soils. 2016 Will be remembered as one of the driest and hottest vintages in recent years. There were 2 heat waves during the season—one in October and one in January. The first heat wave came during flowering, and had a big effect on the bunch and berry size, creating a smaller yield than normal. The second heat wave played a role in creating more concentrated fruit with a great color. Because of the dryer conditions of the vintage, the grapes were very healthy with very little disease. The grapes were destemmed and sorted before fermentation in open top concrete fermenters. The cap was punched every 2 hours until the right extraction was achieved. After pressing, malolactic fermentation was done in 19 French oak barrels and 2 American oak barrels. The wine matured for 19 months in oak. The final wine is quite ripe, with a rounded feel to the mix of ripe plum, blackberry and anise flavors. It features a coating of warmed licorice on the finish, with good underlying energy. Drink now through 2022.