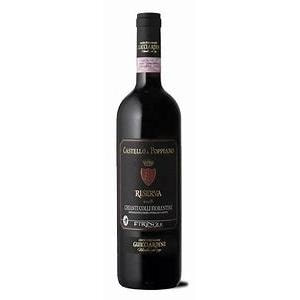 About the Producer: Castello di Poppiano is an impressive medieval building erected around the turn of the first millennium as a fortress for the external defence of the town of Florence.

It has been the property of the Guicciardini for almost nine hundred years since the XII century. In the XVI century it was owned by the Historian Francesco Guicciardini author of the “Historia d’ Italia”. Ferdinando Guicciardini , the present owner, inherited Castello di Poppiano and its estate in 1962, just as share-cropping (which had been for centuries the traditional farming contract in Tuscany) was coming to an end.

That was a difficult period which ultimately led to radical changes to our estate, including crop specialization and upgrading of processing facilities, whilst bearing in mind the fundamental principle that progress should always respect tradition. Castello di Poppiano is located in the area of “Chianti Colli Fiorentini” (“Chianti Hills of Florence”). The Estate extends over 265 ha (650 acres) of which 130 ha (320 acres) are vineyards and 47 ha (116 acres) are olive groves, all of them managed with respect for the environment.

In the fermentation cellar, close to the Castle all endeavours are made to exploit to optimum the quality of the grapes grown and harvested in our vineyards. Maturing in traditional oak casks for Chianti Colli Fiorentini, and in barriques for IGT wines takes place in the old cellar below the Castle adding smoothness and lushness to the wines. The wines then undergo a few months maturing in bottle.

The unique and fascinating “Vinsantaia” (the Vinsanto winery) with its venerable chestnut and oak “caratelli” (the typical vinsanto barrels), is housed in the Torre Grande (Main Tower) of the Castle. The same care is devoted to our olives which are processed fresh, immediately after harvest, in the estate oil mill in the courtyard of the Castle.